Hooked: How to Build Habit-Forming Products

I recently finished a book called Hooked: How to Build Habit-Forming Products by Nir Eyal. The book overall expresses a nice framework for considering products and services, whether or not they should be habit-forming in the first place, and if so how to go about making that happen. The framework is very useful in that it allows for organizations to have a common language they can use to speak about their product and how they should modify or improve it. Below are my notes on a per-chapter basis, and I may follow this with another post summarizing my thoughts on the book and considerations for companies who need to add recurring users, reduce churn, and other common things.

To have an effect on frequency, a tech product must be attached to internal triggers.

Link the product to daily routines and emotions. 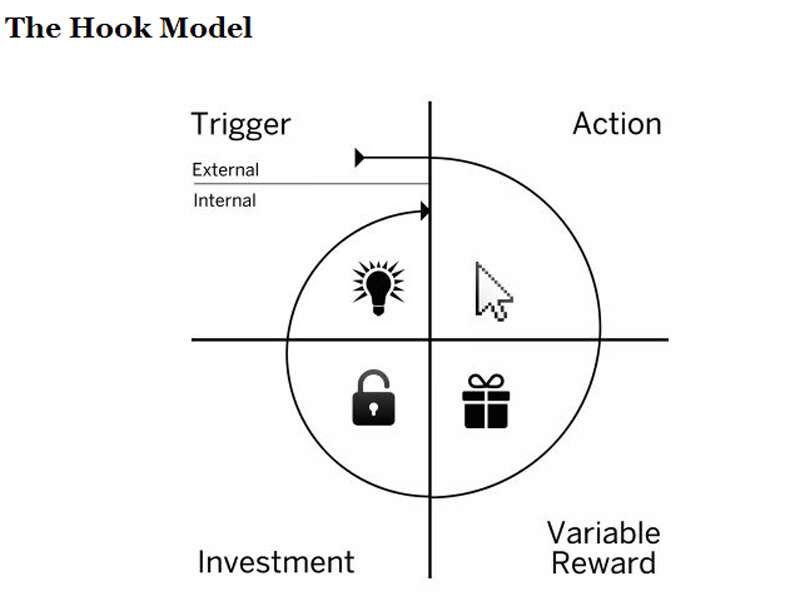 Triggers can be internal or external. The goal is to start with external ones and progress to internal.

It’s important to make it easy to perform actions. Usability design is a big part of this step.

Variable rewards come as a result of actions. There should be the possibility of a reward, but not the guarantee.

Investments are required as the final step. Users must put something into the product or service. These investments can be grouped into time, data, effort, social capital, or money. The investment should improve the product or service through the next cycle. Some examples could be inviting friends, stating preferences, building virtual assets, or learning to use new features.

Habits are undertaken with little or no conscious thought.

Habits are good because they increase Customer Lifetime Value, provide pricing flexibility because customers become less price sensitive, and can reinforce a free-to-play or freemium model.

When people have habits, they involve their social circle.

Viral cycle time: The time required for one user to invite another user.

Consider habits as a strategic decision. Amazon shows ads for competitors on their site because they want users to go to Amazon when they want a product. This forms user habits and Amazon makes money on the transaction as well.

Is your product a vitamin or a painkiller? Vitamins do not solve an obvious pain point and appeal to emotional rather than functional needs. Painkillers solve an obvious need, relieving a specific pain, and they have quantifiable markets.

Habits are not in themselves addictions. Additions are by definition self-destructive in nature.

Not every business requires habitual engagement.

Habits start with external triggers, which are embedded with information which tells the users what to do next.

These manifest automatically in your mind. Connecting internal triggers to the product is the overall goal.

When building your product for triggers, the ultimate goal of the habit-forming product is to ease the user’s pain by creating an association so the user identifies the product with removing the pain.

“We often think the internet enables you to do new things…But people just want to do the same things they’ve always done.” – Evan Williams

Declared preferences are what users say they want.

To initiate action, doing must be easier than thinking.

Three ingredients to initiate a behavior:

A trigger cues an action, motivation is the energy for the action. (see Dr. Edward Deci, Professor of Psychology at University of Rochester)

Take a human desire, preferably one that has been around for a really long time…Identify that desire and use modern technology to take out steps. – Evan Williams (co-founder of Twitter and Blogger)

On the question of starting with motivation or ability, ALWAYS choose ability. Ease of use is the most important thing. If people are motivated but don’t have the ability, then the product is useless.

Scarcity Effect: Use this to drive action and sense of urgency. Show available stock if less than X units, for example.

Framing Effect: Higher costs for a product provide the user with a better sense of enjoyment.

Anchoring Effect: Consider one brand on sale with a higher price-per-unit cost.

Endowed Progress Effect: Punch card with 8 spots versus one with 10 spots and two which are pre-punched. People receiving the 10 spot card (with two pre-punched) started with a sense of progress and therefore had an 82% higher completion rate. There is increased motivation as people believe they are nearing completion of a goal. This effect can be useful as part of an on-boarding process.

The nucleus accumbens doesn’t activate on receiving a reward, but on the anticipation of receiving a reward. In other words, it’s not the reward but the need to alleviate the craving for a reward which is motivating.

Skinners pigeons pressed the levers more times when the pellet was given after a random number of presses. (did they, on average, have to press more times in order to receive a pellet though?)

The self-determination theory of Deci and Richard Ryan espouses that people desire, among other things, to gain a sense of competency. Adding an element of master to this goal makes the pursuit all the more exciting.

Examples of this sense of competency and completion could be video games (e.g., World of Warcraft), email (reducing the number of messages in the inbox as a goal), or places like Codeacademy.

Rewards must fit into the narrative of why the product is used and align with the user’s internal motivations and triggers.

Variable rewards must satisfy users' needs while leaving them wanting to reengage, usually via the tribe, hunt, or self. Email uses all three in that uncertainty over who is sending the message and what it contains, or opportunities/threats to possessions or livelihood combined with social obligation to respond to be seen as agreeable and the uncertain nature and motivation to control it cover all the types.

When autonomy is threatened we feel constrained by lack of choices and often rebel against a new behavior. Psychologists call this reactance. Maintaining a sense of user autonomy is necessary for repeat engagement.

Experiences that maintain user interest by sustaining variability with use are better because people don’t get bored and variable rewards are better than consistent ones from a psychological perspective.

To change or form a habit, we need frequency and a change in attitude or perception about the habit.

Escalation of commitment is the idea that the more users invest time and effort into a product or service, the more they value it. In fact, there is ample evidence to show that labor leads to love.

The IKEA effect (Ariely): The phenomenon wherein people place greater value on things simply because they invested in their own creation.

We seek to be consistent with our past behaviors.

Cognitive dissonance is avoided because we change our perception of reality. Consider the fable of the fox that cannot reach the grapes and decices therefore that they must be sour.

The previous three things together have an influence on future actions.

Rationalization is a powerful thing. This effort must be worthwhile simply because I’m making it, and I’m not stupid, so I wouldn’t be investing effort in something which isn’t worthwhile.

Unlike the Action step in Chapter 3, Investment is about long-term rewards instead of immediate gratification.

The investment phase counterintuitively involves friction, but this friction always comes after the variable reward.

The main idea with Investment is to leverage a user’s understanding that the product or service will get better through personal use and through their investment.

The investment phase is the time to load the next trigger. E.g., interactions with Pinterest give the site tacit permission to contact the user regarding updates to pins or conversations. The same goes for Instagram.

What do your users really want (internal trigger)?

What brings users to your service (external trigger)?

What is the simplest action users can take in anticipation of a reward and how can you simplify the product to make this action easier (action)?

Are users fulfilled by the reward and yet left wanting more (variable reward)?

What bit of work do users invest in the product? Does it load the next trigger and store value to improve the product with use? (investment)

Ethics of the model can be determined by understanding whether you would use the product and whether or not the product will help users materially improve their lives.

Using these two questions, you can group yourself into the set of facilitators, peddlers, entertainers, or dealers.

Facilitators use their own product and believe it can materially help improve the lives of others.

Peddlers don’t use their product but still believe it can help others.

Entertainers use their product but don’t believe it materially helps others.

Dealers neither use the product, nor believe it helps others.

Consider where you fall. How does that make you feel? Ask yourself if you’re proud of the way you influence the behavior of others.